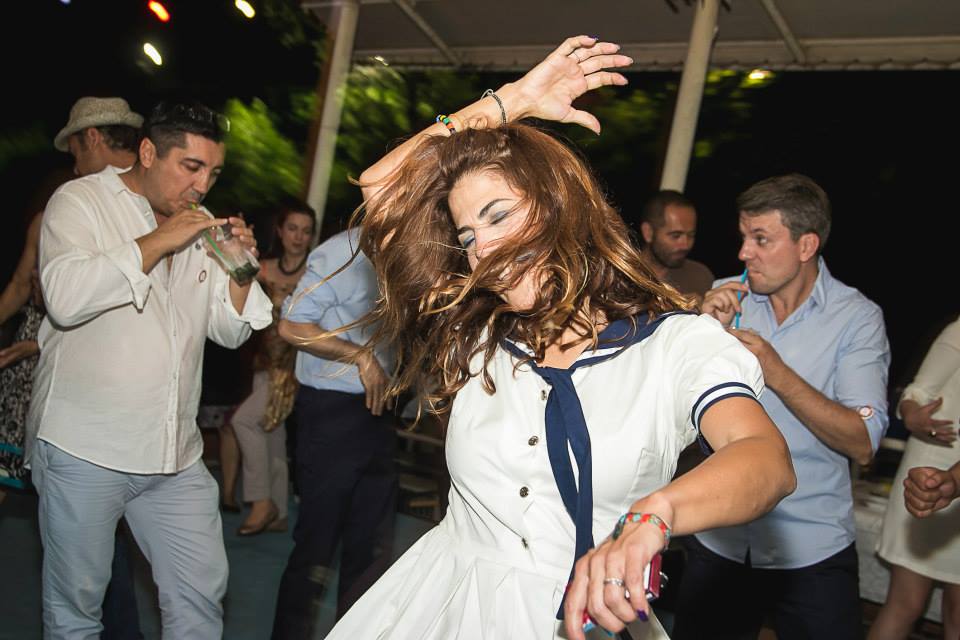 We organized our wedding as a party at Gemax sailing club. The place is famous as a former sailing school, has a super cool deck for chilling, and by far the best sunset shots in Belgrade. I believe we were the first and only ones to rent that place for a wedding. We made the scenography ourselves and added lights and various decorations. Instead of a suit and a wedding dress, Marco got a real captain’s shirt, and I sewed a sailor dress. Guests came from different countries and continents. Some came by boat or sailboat. I remember a friend brought us a paddle as a present.

When we invited our friend Beba to the wedding, she asked if she could wear her favorite vintage wedding dress. I liked that idea very much and knew we had to make something special out of it. When I throw the Biedermeier, Beba will change into her wedding dress and enter the crowd, and then she will accidentally catch the Biedermeier.

Our professional journalist, host, and friend Una Senić announced the Biedermeier toss, the girls gathered and screamed. A bride throws a Biedermeier at another bride. Then the real party began, where Beba performed acrobatic ballet dances, and guys danced with a bride with no groom. Jealous scenes ensue, and Biedermeier, from her hands, has ended in the river.

I don’t remember a single event with so many different impressions and memories the next day. They called one after another to tell us what happened the night before: one friend sprained her leg going down to the lower deck to see what was there, one married couple broke up forever, one left and came back several times, one friend did not remember what happened after a couple of hours, and I had the impression that the evening lasted too short because, for me, it was too intense.

Think a little. Weddings have long been outgrown as a concept of gatherings where the same actions have been repeated for centuries. Whenever you go to a wedding, you know the certainty of almost all the elements you have experienced many times.

So, choose a place not foreseen for weddings, a music band that does not do stalls, dress so that you feel free, and invite friends to be photographers, and DJs.

You can also invite Beba to one of your cool parties. She has her theater, is a circus performer, spins fire at festivals, and performs dances from distant lands – ravishing bride on stilts made from sequins.